The tips below mainly apply to Rec teams that have a mixture of players and don't have much practice time. If you have a great team of fast athletes and can practice 2 or 3 times a week, you will want play a more controlled attack that maintains possession. However, some of the tips such as not putting timid players in front of your goal apply to all teams.

Soccer positions basics are at Soccer Positions Basics. For How to Choose and Teach Formations, see Formations

"Your stuff is the best I have ever read. I have been coaching for 35 years and wish I had your insights long ago." Scott, VT, Premium member

"I have learned more in the two weeks since subscribing to Premium than I learned in seven years of coaching.” Coach Rion, SC

Save $5 on SoccerHelp Premium - SoccerHelp Premium has 1,500 pages, 5,000 links & 100 articles about positions and formations. Use the Coupon 5offpremium to subscribe to Premium for $10 for 30 days, $20 for 120 days, or $35 for a year. We do NOT automatically renew subscriptions. 5-day money back guarantee. 15,000 Coaches have subscribed. 400 Testimonials Sign up at http://soccerhelp.com/members/signup

How to Choose a Soccer Formation

How to Assign Soccer Positions

The Diagram below is for a 2-1-3-1 soccer formation and shows a team Attacking with 2 Fullbacks Defending Deep, One Stopper, 3 Midfielders, One Forward. The ball is in the opponent's Penalty Box. This formation and Style of Play is good for a Rec team that has some slow and timid players. 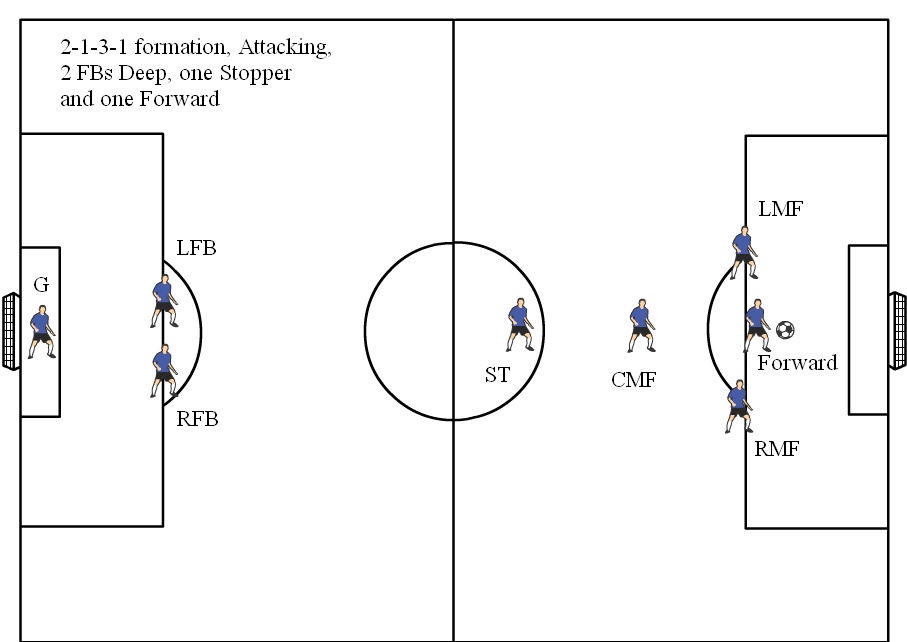 See prices for our iron on Motivational Soccer Patches